The life of diesel

Diesel begins its life as a crude oil fraction, which undergoes a number of processing steps starting with fractional distillation. The crude oil is heated and pumped into a tall distillation column where the oil is further heated with hot process steam until it vaporises. The hot vapour cools at different rates, distilling at various points within the column into different components depending on molecular weight. 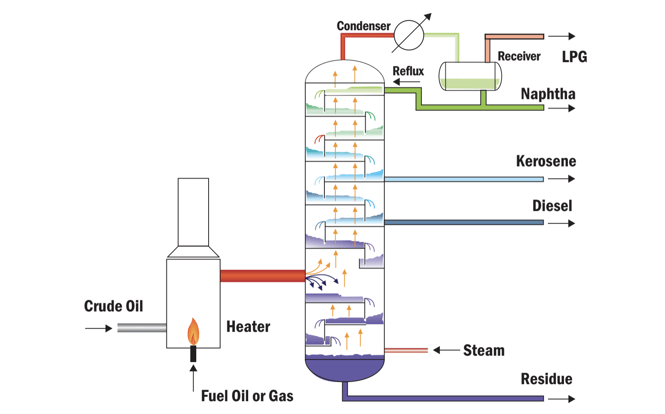 Along with kerosene, diesel components typically distil in the middle section, giving them the name middle distillates. Lighter kerosene ultimately becomes jet fuel, while the heavier kerosene becomes light diesel. The diesel and kerosene streams are both put through respective hydrotreaters to reduce sulphur levels from around 600ppm to 30-40ppm, to meet the sub-50ppm specification. Downstream of this process the streams, are combined to form the main blending component of diesel fuel (the ratio is of diesel to kerosene in this blend is typically 80/20, though this may differ between refineries depending on the market they serve).

The larger molecules of the oil need to be hydro processed in order to remove the sulphur, which reduces the density of the product. Moreover, because sulphur has so many bond sites it is actually a reasonably good lubricant, so removing it reduces lubricity. For this reason, a lubricity improver is added to the streams on their way to the batching tank. Also added is a conductivity improver, which is essential to prevent the diesel from generating a static charge while it is pumped into and from the tank and between loading gantries, which in a diesel vapour-rich environment would obviously present a fire hazard.

An additional but crucial additive is cold flow improver. At especially low temperatures, the paraffinic molecules in diesel agglomerate, forming wax crystals that block the fuel filter and thus the flow of fuel to the engine. Cold flow improver lowers the temperature at which paraffinic wax crystals precipitate out of solution. This is the Cold Filter Plugging Point (CFPP). The South African Bureau of Standards SANS 342 specifies summer and winter CFPPs of 3°C and -4°C respectively, but in some parts of South Africa, refiners will push it as low as -7°C. This is a critical specification for road transporters and mining companies, many of which must operate reliably and safely at very high altitudes with concomitant freezing temperatures.

Once the appropriate additives have been included and the product batched in the tank, it is certified diesel and ready to go to either a retail or commercial customer site. It can get there via pipeline, either to an intermediary terminal or directly to the commercial customer site, or by road tanker, which is the most common route to market for the majority of the diesel produced at the Astron Energy refinery in Milnerton. While some tankers can carry both petrol and diesel, a dedicated diesel vehicle is preferred to avoid cross-contamination between the two. Next to the refinery is a tank to truck loading rack, which has a loading arm that connects to a truck and pumps it full of fuel. As the truck tank is full of air and the diesel is pumped into it at an immense rate, the aforementioned conductivity improver is a vital additive to prevent static charge accumulation at this stage.

When the truck arrives at the customer site, the diesel is then positively pumped into an above-ground tank system or gravity fed into an underground tank, which is a slower process unless a very powerful pump is used. From there, it is ready to go into the tank of the relevant equipment – be that truck, consumer vehicle or mining equipment.

Those mining customers utilising the latest equipment, with more stringent requirements for fuel cleanliness, generally want their diesel to be filtered down to a low ISO standard to reduce wear on injectors, which can cost anywhere from R12 000 each for light vehicles up to R100 000 for heavy machinery. To further protect these expensive components, which in modern engines inject fuel directly into the combustion chamber and are thus exposed to extreme temperatures, Astron Energy also offers a product containing a detergent additive, called QUARTECH D®. These detergent chemicals have a dual benefit. They attach to certain molecules before they reach metal surfaces, allowing them to remain in air and thus participate in the combustion process, increasing fuel efficiency by 2-3% in lab conditions. They also keep the diesel injector tips clean, increasing their life span and reducing costly maintenance.

For further information or assistance with your diesel needs, please get in touch with our sales team.

Transporters can meet contracted rates effortlessly when they have the option to use an extensive network of service stations offering special diesel prices – thus...