Women are the Heartbeat of Astron Energy’s Operational Efficiencies

More than two decades after South Africa achieved democracy, women's empowerment is still a topic of discussion in the corporate and business world. Many companies are still lagging; either lacking enough policies and measures to advance women's agenda in the workplace or, if such exist, they just implement them as a tick box exercise to comply with legislation.

At Astron Energy, the role of women in the success of the petroleum company could never have been given more prominence as women are not 'empowered' but occupy senior and influential roles on merit. The petroleum industry has always been regarded as a male terrain and, to a large extent, still is. How have Astron Energy's Joyce Magano, National Sales Manager: Indirect Channels - Aviation and Specialities, Nomandlovu Dumse, Fleet Operations Manager and Sisanda Tsotsobe, Sales and Operation Planning Coordinator, been able to make their mark in this fast-paced sector? 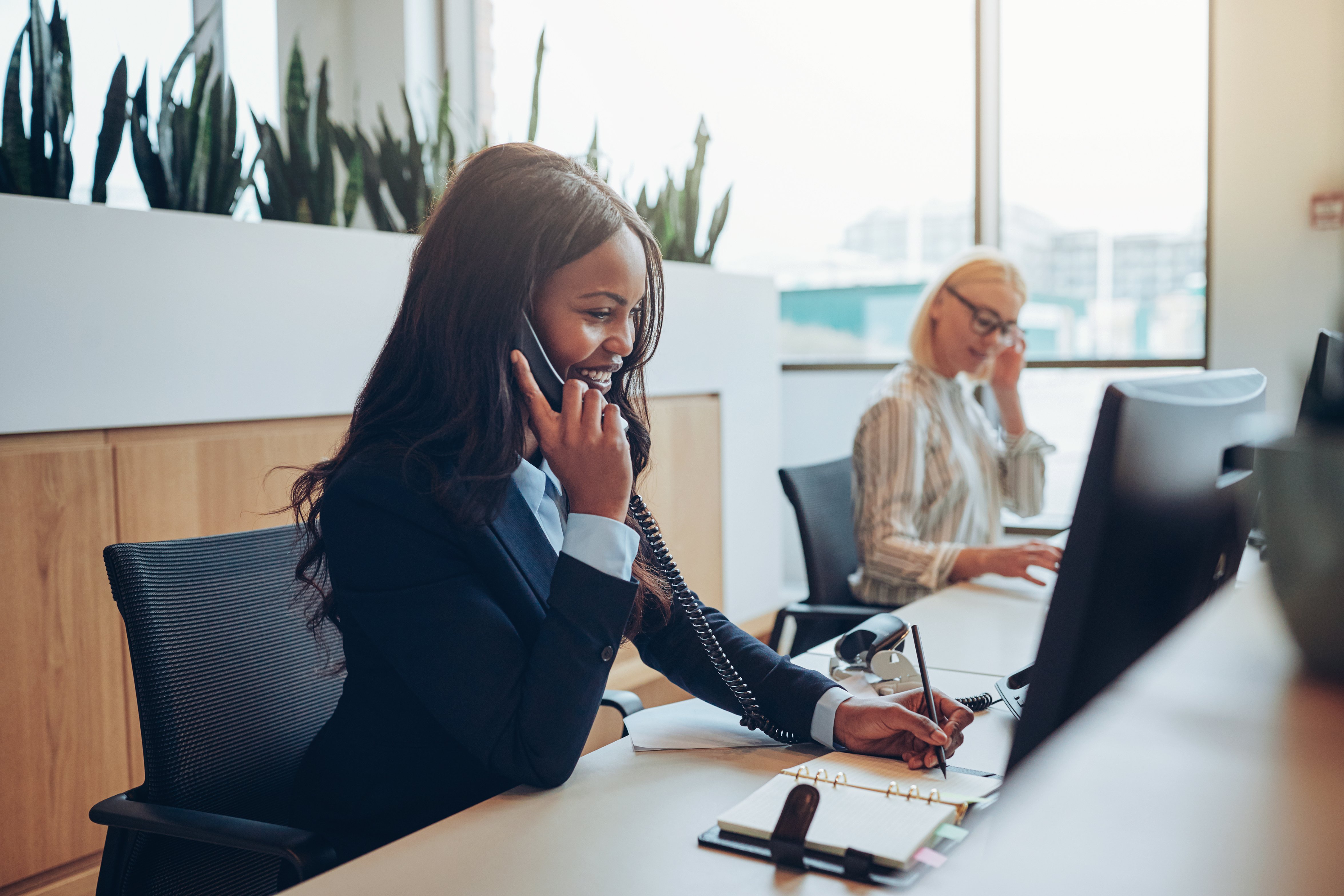 “I have always been a ‘sucker’ for challenges; breaking barriers to achieve success ever since I joined this industry in the late 2000s,” says Joyce. She has not allowed herself to be boxed in by her job description.

Joyce explains that she endeavours to take more interest in understanding customer’s operations beyond products as this is how I am able to uncover their challenges. Consequently, my clients are happy customers who keep coming back because they regard me as an effective salesperson who adds value to their operations.

Joyce has achieved a lot in the year that she has been in her current role. She states that she was originally hired to improve Astron Energy's aviation business unit. Always up for a challenge, she did not disappoint. Thanks to her commitment and dedication to excellence, Astron Energy now has operations in three of South Africa's major airports. Whereas it only used to operate from the Cape Town International Airport, Astron Energy has expanded its operations to include the O.R Tambo International Airport in Johannesburg and Durban's King Shaka International Airport in under a year! "Achieving such success is not easy, especially for a woman. It is unfortunate that, in our industry, women have to work twice as hard as men do just to prove themselves worthy of their roles. Fortunately for me, I have always delivered on my mandate, much to the disappointment of many a male chauvinist in my midst," says the overachiever who highlights that at some point in her career, she used to work 24/7/365 days a year just so her company could be regarded as one of the top players in the South African petroleum industry. Thus, she netted sales of up to US$3 million in a year! Joyce hints, however, that she has yet to scratch the surface as far as achieving goals and objectives for herself and Astron Energy is concerned.

Be the Mistress of Your Destiny

Nomandlovu, another inspirational woman in Astron Energy's corridors of power, says that knowledge has contributed immensely to her success.

Noma has held positions at other petroleum companies in South Africa and, without hesitation, [she] states that she considers Astron Energy not only as one of the best companies to work for but as a beacon for women's empowerment in an industry that, to a large extent is still a males' playground. "At Astron Energy, hard work will take you anywhere. No one tells you that you can or cannot do something because you are a woman. If you are equal to the task you can go for it. Astron Energy recognises hard work and I am part of the evidence in this respect," Noma elaborates.

According to her, self-doubt has been the major hurdle against women's progression in the workplace. Noma urges women to believe in themselves, all the while being aware that the proverbial glass ceiling that used to hold them back in the workplace was shattered a long time ago. Noma indicates that nowadays, women can be as successful as they want to be if only they put in the effort. "The sky is the limit. Gaining as much knowledge and skills as a woman can remove any obstacles one is likely to face. Improve your knowledge and work hard so that you can deliver quality output in any role and no one will undermine your worth or determine your success. You will be the mistress of your destiny," proclaims Noma.

Nomandlovu is among a growing number of South African women that are leading the pack in career circles, ensuring that they take up their place at the table. “I could not have done it alone. I have always drawn strength and motivation from my mother; my greatest fan and role model. It has nothing to do with my career growth but everything to do with the fact that my mother has always been there to motivate and carry me through certain stages of my life. There are other role models I can mention but my mother is the most significant,” says Noma, an avid fan of self-care as a means of achieving work-life balance.

If the saying that goes: "If you want to go fast go alone; but if you want to go further, go together," could be brought to life, then it would be personified by Sisanda. Qualified as an engineer, she is a firm proponent of destroying silos in the work environment and taking the entire team with her as she strives to meet organisational goals.  "While we are hired for our respective skill sets, what is the use of my expertise when I cannot rope in my fellow team members to drive Astron Energy's operational objectives? I believe that the whole is greater than the sum of its parts and we are better together,"  Sisanda says.

According to her, she and her team thrive because they ensure that they invest maximum effort in preparing for every little task and meeting. “I learnt very early in my career, thanks to my male colleagues, that one is allowed to celebrate every little success. I have seen men do it quite openly - so what can stop us as women because we are equally capable of achieving the same successes?” she asks.

Part of Astron Energy’s brand promise and value proposition is to offer the best fuel solutions, cost-effectively, to its clients. Where do these dynamic females position themselves in this regard? States Sisanda: “We are like the supermarket for fuel solutions. Just as I would expect to get all my supplies at a competitive price from the same store, our clients expect the same of us. I believe that they need the assurance that they will always get value for their money by doing business with Astron Energy.” As such, she continues, “it is my mandate to ensure that all operational efficiencies in the sales value chain are efficiently run to meet and satisfy customer demands. Dissatisfied customers are a serious indictment on my ability to deliver on my job description.”

Without dedicated employees and women like Noma, Astron Energy might not be the reputable customer-centric company that it is. She says that her job allows her to work closely with clients; thereby allowing her to gather invaluable insight about customers’ needs and how Astron Energy can better serve them to retain them while attracting new ones. “In a small way, my efforts within the company have enabled Astron Energy to better meet customer needs - delivering fuel and lubricants to our clients on time and sustainably,” Noma shares elaborating that the customer is the most important stakeholder that Astron Energy has and, therefore, the company cannot afford to drop the ball. “So, in all that I do, I always measure my effort: did I offer my best?”

Ever the ultimate salesperson and Astron Energy brand ambassador, Joyce points out that the customer always comes first. “I have, often, been a recipient of messages from my colleagues asking me why I was not in a certain internal meeting. While I am an employee of Astron Energy, I believe that our clients take more priority than our internal stakeholders. If I don’t put them at the centre, then there might be no Astron Energy to speak of,” she points out highlighting that customers are Astron Energy’s key stakeholders who need constant cultivation if they are to bring in business which the company needs to make a profit. In that vein, she stresses that she is forever telling her team members to ensure that they go the extra mile to solve the customers’ problems. “My job is not all about chasing numbers. While these may be important, it is much more than that. It is about ensuring client satisfaction all the time. Consequently, as head of sales, I am always on the lookout for new ways to better serve our customers and attract new ones.”

That Astron Energy is a progressive company in a Fourth Industrial Revolution era where women’s empowerment has been brought into sharp focus, the world over, is undeniable. Joyce, Sisanda and Noma are all evidence of what is ‘womanly’ possible when a company embraces capable women who possess the desire to succeed while propelling their organisation forward. There are many women of such calibre at Astron Energy - across departments and rungs - each successful in their own right. It is but a matter of time before they can reach the apex of the petroleum industry so that they, too, can manifest what is ‘womanly’ possible and that, indeed, women are the heartbeat of Astron Energy’s operational efficiencies.

Minimizing costs and downtime in the Energy Sector

At Astron Energy, we don’t accept the status quo, particularly when challenges are industry-wide and costly. We sat down with David MacIntyre, Finished Lubricants...