For its more than fifty-five million people, South Africa’s transport sector is the live-wire underpinning economic and social development. Tied to the movement of goods, be it bulk dry cargo, liquids, perishable or non-perishable goods, is the need to ensure security of fuel supply – the life-blood of the transport sector.

And while South Africa’s coastal regions may be the landing zone for goods from global destinations, they are also the loading zones for dispatching products across the country, including the five inland provinces – the Free State, Gauteng, North West, Limpopo and Mpumalanga.  Although Gauteng is South Africa’s smallest province by land area, it is the country’s economic powerhouse, contributing some 35% to gross domestic product (GDP). Together, the five inland provinces contribute just over 60% to GDP.

Given its importance to the economy, liquid fuel is regarded as a strategic necessity to the country. South Africa’s fuel consumption is estimated at a whopping 11,1-billion litres of petrol and 12,1-billion litres of diesel a year. So, to keep the wheels of the economy moving smoothly, the country relies on its six refineries, four of which are based along the coast; namely the Cape Town Refinery (Astron Energy Refinery -Caltex), Engen Refinery (Enref), Sapref Refinery and PetroSA’s GTL Refinery in Mossel Bay as well as two inland refineries - Natref and Sasol Secunda Refineries.

To meet the growing demand for fuel in the inland area, Transnet Pipeline completed the construction of a new multi-product pipeline (NMPP) in 2012. Crude oil and refined product (diesel and petrol) are transported from the coast via a dedicated crude oil pipeline and a NMPP to inland refineries and the products are marked for use by all oil companies.

MPP’s are considered to be one of the best suited modes for transporting large volumes of petroleum products over long-distances. Transnet’s NMPP is designed in accordance with world class standards and is one of the biggest pipelines in Sub-Saharan Africa. Transnet Pipeline transports around 16 billion litres of liquid fuel per year (roughly 65 percent of the total demand) through a network of 3 800 km of petroleum and gas pipeline infrastructure. The pipeline network runs through KwaZulu-Natal, Free State, Gauteng, North West and Mpumalanga provinces; traversing farmlands, mountains, rivers, residential areas, major highways and roads. 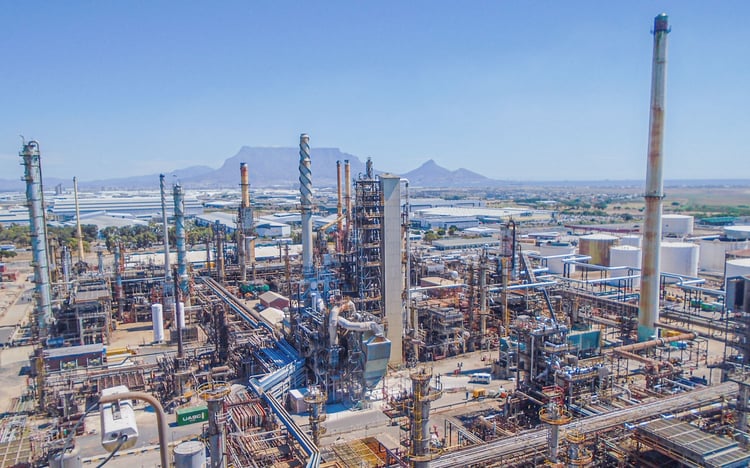 With all oil majors, including Astron Energy, being important customers of the Transnet Pipeline, the company remains focussed on ensuring security of supply, especially to the inland market, which supports the key industries of mining, agriculture, transportation and manufacturing. Transnet Pipelines offers its customers an integrated supply chain solution targeting reliability and product consistency delivered on-time and to customer specifications. Given the importance of the inland market, if the pipeline was out of operation, the potential impact and repercussions to the economy would be astronomical – from slowing down economic growth to consumers being hit with higher prices. It is, therefore, critical to Transnet to safeguard against any interruption to the pipeline operation to avoid incidents like the fuel shortages seen in June and July of this year.

In fact, Transnet Pipeline has, over the past year, experienced an enormous spike in incidents related to the theft of petroleum and diesel, as well as costly malicious damage to property. In the most recent episode, pipeline tampering caused a massive spill which contaminated the Umbilo River and reached the harbour area in Durban, KwaZulu-Natal. In the current financial year alone, Transnet pipelines has had over 80 incidents of fuel theft and tampering with pipelines. These episodes are the biggest threat to the security of fuel supply, particularly to the inland areas.

In July, the South African Petroleum Industry Association (SAPIA) flagged ongoing challenges related to incidents of theft and tampering of the pipeline network which interrupted fuel supply to the inland market.

Pipeline safeguards are an imperative for the well-being of people, the economy and the country. Transnet Pipeline’s proactive stance and joint security operation with the Directorate for Priority Crime Investigation (Hawks), National Intelligence and SAPS has since led to a number of arrests and one successful conviction.  Further to this, the SOE took measures to mitigate future threats by putting out a contract for the deployment of eight Remotely Piloted Aircraft System (RPAS), otherwise known as drones, together with mobile surveillance operational teams in the five provinces. The installation of aerial surveillance in hot spot areas has subsequently led to numerous arrests of perpetrators in the act of stealing fuel. These measures have worked well to ensure the smooth functioning of a key element driving the economy.

As a result of the recent inland supply disruptions, Astron Energy is working to expand its current infrastructure to increase stock holding capacity for this key market.  While Transnet continues to put measures in place to deter pipeline tampering, Astron Energy is also assessing a mix of additional modes of transportation of fuel into the inland market to reduce future impact.

To find out how Astron Energy can help you secure your fuel inventory requirements, contact us today

South Africa’s population is estimated at around 60 million people, equivalent to 0,76% of the global population.  It is regarded, however, as the country with the...

Diesel density and stability - In this blog, the last in our five-part Myth Buster series, we explore the myth that diesel density is too close to petrol to justify...